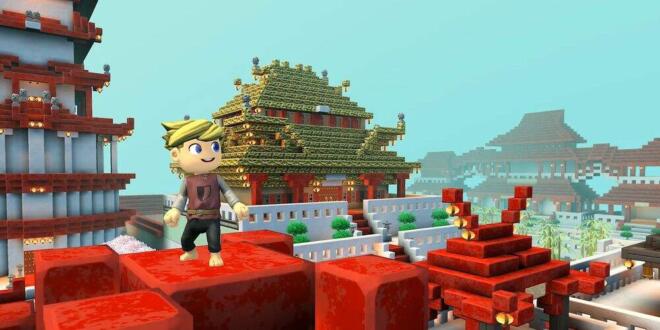 – The universe selection menu has been updated and it now allows the creation of “Creative” Universes.
– Players can now create up to 5 Universes.
– Creative Universes have unique rules:
o Islands can be created from a selection of presets or copied over from other Universes.
o Islands in the Creative Universe can be freely named and re-named.
o Everything can be mined with one strike.
o All game items (blocks, props, etc.) are available in inventory and can be used without limit.
o Characters can fly – initiated by double-jumping.
o It’s always daytime.
o Plants do not grow.
o There are no enemies.
o There are no quests or events.
o There are no loot drops.
o Placement and mining distances are longer than in Adventure Mode.
o Characters can fall from an island without penalty.
o Characters cannot drown.
– Three new bosses have been added – the Slime Queen, the Knight Hunter, and the All-Watcher! Quests in Port of Caul (1-07), Witchwater (2-04), and Sea of Stalks (3-06) will lead you to three epic battles. (Regeneration of the universe may be required if the islands had been visited before.)
– New Towns. (Regeneration of the universe may be required if the islands had been visited before.)
o “Palm Bay” (Island 2-01) is now called “Landlubber’s Leap” and hosts a new pirate hideout:
* New NPCs with additional dialogs and quests.
* New rewards for the player.
* New merchants selling current and new items.
* New pets.
* New hair and beard styles.
* New building blocks.
o The Ranger’s Guild “Bodkin’s Point” has been added to Hintertown (2-03):
* New NPCs with additional dialog and quests.
* New rewards for the player.
* New merchants with a mixture of old and new items.
* New pet.
* New decorative props like the new kitchen set and ranger themed items.
– New Items
o Several new home décor props have been added, including bathroom furniture, kitchen-themed items, cage doors, awnings and potted plants.
o Water pumps and drains are available. An unlimited water source item is available in Creative Mode.
o Players can craft three types of gift boxes containing items from a pool of resources, such as valuable crafting ingredients, furniture sets, vanity items, etc. If players want to gift somebody a little Portal Knights present or want to give out prizes for a challenge or tournament they can use those boxes.
o Traps are now available for Rangers to use against enemies.
– Armor Progression
o All armor has been reworked
o Some armor is now dropped from normal dungeon chests instead of being crafted.
o Some armor has been reworked and rebalanced to better align to this new system.
o Two additional endgame armor pieces for each class have been added to the game.
o A new upgrade station, the Altar of Enhancement, has been added to the Portal Knights Sanctuary, allowing mid-tier armor to be refined into the high-end armor.
o Rings and Capes have been rebalanced and are now dropped as loot from epic chests and bosses.
o One new high-end Cape for each class has been added.
– NPC Features
o Tutorial NPCs can now also be picked up and be relocated.
o At various points in the game players can interact with a mysterious Spectral Knight who will guide the player and give hints. (Regeneration of the universe may be required if the islands had been visited before.)
o NPC merchants offer more consistent gold coin prices now.
– Other Features
o Mailboxes in the game will now periodically have gift packages for the players. The mailboxes can be crafted and placed anywhere but they can also be found at major forts or villages.
o New gifts can be collected once per player account.
o All bombs, artifacts, and potions — except health and mana potions — are now crafted at the new Alchemy Table.
o An “Automatic Camera” option has been added and enabled by default. The Automatic Camera will track the player and position itself behind them. If the Automatic Camera doesn’t work for you, you can switch to the classic camera setting at any point.
o New side-by-side chest menu! When you open a chest or other container, you’ll now see a handy side-by-side view of your backpack and the chest, along with shortcuts for mass item transfers and stacking.
o Consumable items and recipes can now be used directly from your backpack (via the More Actions menu).
o Completed events now grant XP and gold.
o Added rare drop chance for pirate trophy to hollow knight pirates.

– Faster loading times.
– Dungeon chests, bosses and enemies have been reworked to drop more interesting loot.
– Object highlighting shows more clearly which objects on the island can be interacted with. The types of interactions are now specified as well.
– Reduced the size of crafting stations.
– The Jade merchant and Pet merchant events are now rare events, randomly triggered.
– Some tutorial texts have been reworked to better fit the player’s journey.
– The camera smoothing option has been removed as it didn’t have the desired impact.
– The first-person camera block placing animation has been changed so as not to obstruct the player’s view as much.
– Block drops from enemies have been replaced with items that better match the player’s progression through the game, like resources for potions.
– The recipes for potions have been reworked in areas where resources were too hard to obtain or required the player to jump between islands too much.
– Quest and boss key items can no longer be trashed. They can still be dropped into the world to exchange them between players etc.
– The mage weapons “Dancing Swords” have been polished.
– Mine carts and tracks can now be mined and placed.
– Dungeon chests can now be mined once they have been opened.
– Tree density has been lowered on vacant islands.
– The quest system has been reworked – regenerating a universe no longer resets quests.
– Added variants of gold coin drop models to signify larger gold drop amounts.
– Remaining event time is now shown in the quest HUD.
– Fast travel by gamepad has now dedicated hotkeys for going home and returning to landing pad.
– Completing quests shows a new quest completion popup.
– High value items now have new VFX when dropped.
– NPC greeting sounds trigger now when the player is closer than before. This should improve greeting spam in densely populated areas.
– The drop chance for sharpening stones, traps, tomahawks and totems has been increased.
Cooldown for health and mana potions has been reduced.

– Split screen handling in the pre-game menus has been improved.
– Gaining HP or Mana no longer counts as combat.
– Fixed a bug with loot sometimes being dropped twice.
– Fixed the bug that players would sometimes get stuck in their movement for no apparent reason.
– When returning to Maria with the C’Thiris mask equipped as a helmet, she correctly recognizes now that the player owns the mask.
– The “Shout”-quest from Guildmaster Rudyard in Fort Finch now correctly counts the Gazers that have been affected by the shout skill.
– Fixed events with portals to have the correct portal stone color now.
– Improved the saving process to avoid issues in certain edge-cases.
– Improved the enemy drop rates of some event specific resources to make events less grindy.
– The mana orb drop rate from enemies does no longer scale up with player count in multiplayer.
– Several text cut-offs or incorrect line breaks have been fixed in various languages.
– The art for the world globe in the background of the title screen and the worldmap has been polished.
– Several HUD elements have been polished, both stylistically and concerning the layout.
– Improved HUD elements layout for split-screen mode, especially XP bar and oxygen bar.
– Player names now keep the red color correctly when switching islands whilst low on health.
– Water behaves better at underwater dungeon entrances now.
– The level of an island is now displayed shortly before spawning at the landing pad.
– Pets move less erratic now.
– The character no longer dies twice when returning to the landing pad at the same time as they died.
– Player characters no longer collect loot after having been killed.
– The sit emote no longer causes issues for follow-up actions like using the teleport scroll or returning to the landing pad.
– Mage weapons with light damage cause the correct damage type now.
– Improved the layout of some islands, especially in normal size, where not enough suitable areas for enemies occurred. Due to the randomized island shapes the issue may still occur occasionally.
– The C’Thiris Cultist Mask works better with several of the hair styles now.
– The Archer Station has the correct sound and visual effect now.
– Jumping feels more consistent now.

– It is possible to assign the stick axis to any action. This can cause movement or camera to not work properly anymore until resetting the button bindings. Future updates will prevent re-assigning the stick axis.
– If you don’t have an active Nintendo Switch online membership, sometimes the warning message will be incorrectly displayed as error message when trying to create or join an online session.